Wing Safaris over Namibia are certainly the most exclusive way we can introduce Namibia to you. Avoid exhausting road trips and still enjoy one highlight after the other.

Arrival at Hosea Kutako International Airport, where you will be met by a representative of Namibia Tracks and Trails who will chat with you about your tour. Feel free to ask the representative any questions you might have.

Afterwards you embark on a light-aircraft transfer to NamibRand.

On arrival at the airstrip you will be met by one of your local guides, who will transfer you to Kwessi Dunes (or similar).

Namibia’s striking NamibRand Nature Reserve is a vast desert wilderness of over 200,000 hectares. With its rolling desert plains and backdrop of craggy mountains and iconic red dunes, this is a place where time seems to stand still and the space is never-ending.

Enjoy a sundowner drive in the afternoon.

Today you have an early morning start for a visit to the Sossusvlei dunes. The park gates open at dawn and the golden light just after sunrise is perfect for photographs.

Sossusvlei is possibly Namibia’s most spectacular and best-known attraction. Characterised by the large red dunes that surround it, Sossusvlei is a large, white, salt and clay pan and is a great destination all year round. The dunes in this area are some of the highest in the world and provide photographic enthusiasts with wonderful images in the beautiful morning and evening light. Sossusvlei literally translates to “dead-end marsh”, as it is the place where the dunes come together preventing the Tsauchab River to flow any further, some 60km east of the Atlantic Ocean.

However, due to the dry conditions in the Namib Desert the River seldom flows this far and the pan remains bone-dry most years.

Today’s flight will give you an aerial view of the majestic dunes surrounding Sossusvlei.

Proceed along the coast (subject to weather conditions) over Conception Bay, Sandwich Harbour and its famous lagoon to Swakopmund. This quaint desert town with its old-world charm and relaxed atmosphere hedged by desert and sea, is enhanced by lush green lawns and palm trees.

A transfer company will drive you from the Swakopmund Airport to your accommodation.

Spend the day at leisure or explore Swakopmund on your own account.

Overnight stay at Strand Hotel (or similar) (on Breakfast basis)

A transfer company will drive you from your accommodation to the Swakopmund Airport.

You will board the small aircraft for your charter to Twyfelfontein. After check-in at the camp you enjoy an afternoon excursion to Twyfelfontein, the Burnt Mountains and the Organ Pipes.

Overnight stay at Camp Kipwe (or similar) (on Full Board basis)

Today you embark on a morning drive in search of the desert elephants.

After breakfast transfer to the airfield for your flight to a private game reserve bordering the Etosha National Park. Upon landing at Ongava’s private airstrip your rangers already await you and will transfer you to Ongava Lodge. Ongava Lodge is situated along the southern boundary of Etosha National Park in the privately owned Ongava Game Reserve. Ongava is the ideal place from which to base your activities when visiting Etosha.

Ongava Lodge is one of Namibia’s premier lodges on one of the country’s most important private game reserves. The well-established Ongava Lodge is situated in the privately owned Ongava Game Reserve along the southern boundary of Etosha National Park. Placed as it is close to the top of a hill in the foothills of the Ondundozonanandana range, the vantage point is beautiful and overlooks a well-frequented waterhole and the plains beyond.

Ongava Lodge offers luxury accommodation in 14 rock-and-thatch en-suite chalets. There are impressive views over the camp’s waterhole from the main lounge and dining areas and there is also an inviting pool to cool off in the heat of the day. Meals are either served in the main dining area under thatch or on the dining deck under the stars.

Activities include game drives into Etosha, spending time in the camp hide, and nature drives and walks on the reserve. Ongava has resident white and black rhino, giving guests staying at Ongava the opportunity to see both species.

The following morning you embark on a morning game drive in the Etosha National Park.

After a light lunch and a siesta back at the lodge you explore the Ongava Reserve on an afternoon game drive.

After a last morning activity & breakfast the scheduled flight takes you to the Okonjima Nature Reserve, which is the home of the AfriCat Foundation, a non-profit organisation dedicated to the conservation and protection of Namibian wild cats, in particular leopard and cheetah.

Enjoy the opportunity to admire and photograph these predators during the afternoon activity.

Today you fly back to Windhoek in time for check-in on your outbound flight.

Take care of all formalities and bid farewell to Namibia; we wish you a safe journey home. 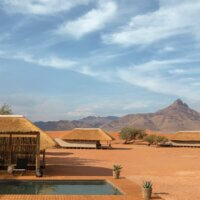