Why Every Photographer Needs to Visit Namibia 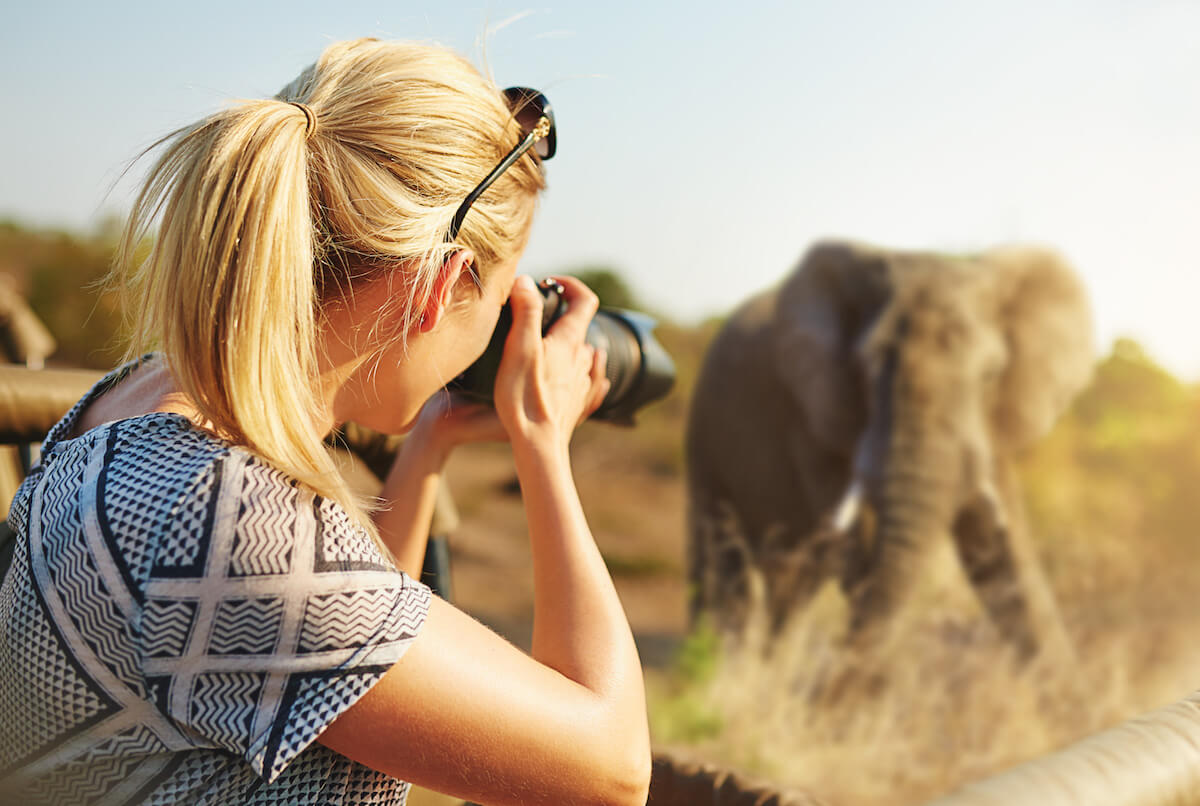 Among the many alluring reasons to visit Namibia, two stand out bright and clear: the awe-inspiring landscape and the iconic and diverse wildlife.

A mobile safari is the best way to see both in all their splendor. And when you plan to explore with Namibia Tracks and Trails, one thing you’ll definitely want to pack for your safari is a camera.

Whether you’re an avid photographer or a casual traveler who likes to snap photos for fun, the sights of Namibia are treasures you’ll want to bring home with you.

Namibia is a big place, with an overwhelming number of beautiful destinations to try and capture. How do you decide where to go to take truly impressive photographs that’ll blow the minds of everyone back home?

From our most famous national parks of Etosha and Namib-Naukluft to the seaside destinations of Walvis Bay and the Skeleton Coast, here are 5 must-photograph locations in Namibia. 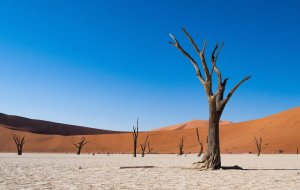 In the southwestern part of Namibia lies the massive Namib-Naukluft National Park, home to some of our country’s most photogenic sites.

It’s here in the southern part of the Namib Desert where you’ll find the Sossusvlei salt pan. This iconic wonder is known for its towering red sand dunes, some of which stretch close to 400 meters into the sky!

Particularly spectacular are Dunes 39 & 45, though Dune 7 is the highest. Any make for a worthy subject for photographers — their stark red outlines against a bright blue sky present a case study in landscape profiles, while the view from the top offers the opportunity to capture the surrounding area in all its glory.

Another excellent shooting location in the park is Deadvlei, a clay pan with a foreboding name that comes from the ancient remains of trees which have been preserved here.

It’s these trees that make this a must-photograph location — their skeletal appearance gives this area an other-worldly vibe that you won’t find anywhere else on planet Earth.

Finally, you’ll want to make your way to Sesriem Canyon, a slot canyon near the southern edge of the Naukluft Mountains. This narrow, winding canyon makes for a great photo opportunity, especially when the sunlight hits just so — craggy walls that rise straight up on either side create a unique interplay between light and shadow. 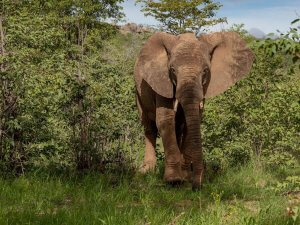 Etosha is a must-visit destination for photographing the most treasured of Namibia’s wildlife offerings. Situated in the north-central region of Namibia, this park is home to countless species native to this country.

That includes elephants, lions, giraffe, and rhino, to name just a few. The best time to visit for most wildlife photography in Etosha is in the dry season (May to November). This is when animals rely on watering holes, which makes for exciting and relatively easy wildlife sightings.

But don’t forget the famous flamingo migration, when millions of the pink birds settle in the rain-soaked salt pans. To photograph this wonder of nature, you’ll want to visit in the wet season, specifically January to February.

One tip for photographers hoping to snap pics of animals in Etosha, or anywhere in Namibia for that matter: the early bird gets the worm!

Many animals sleep during the day. Activity is highest at sunrise, so you’ll need to wake up early to get the best shots. 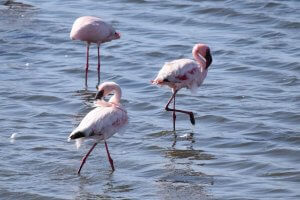 Walvis Bay on Namibia’s Atlantic coast offers a bevy of opportunities to photograph sea life — seals swimming alongside your boat, whales crashing through the waves, and much more.

We recommend taking a boat out for a day to get the best angles on dozens of types of creatures, including:

While you’re in the area, visit the old-world desert town of Swakopmund — it’s pier makes for particularly gorgeous photos at sunset. 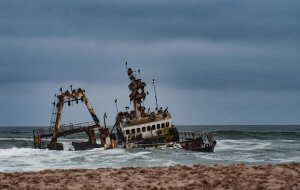 This park has endless incredible photo-worthy features — one of the most inspiring being the shipwrecks that dot the coastline. These skeletons of the sea rise eerily up out of the water, while others lay washed up on the beach’s sand.

Be sure to stop at Möwe Bay to snap photos of the seals that have formed a colony there. Their playful nature is irresistibly photogenic!

Here you can explore an abandoned diamond mine, with long-forgotten dreams of fortune dried up by the desert and erased quite literally by the sands of time. What remains is a ghost town — an evocative dreamscape waiting to be captured by your lens.

Then there are the dunes that line the beach, offering a great vantage point for dynamic landscape shots that highlight the drastic meeting point of the desert and the ocean.

This UNESCO World Heritage Site is famous not so much for its natural beauty, but for the beauty that early humans imbued upon it thousands of years ago.

The rocks in the valley of Twyfelfontein are decorated with thousands upon thousands of petroglyphs, some originally etched here as long as 10,000 years ago. Most of these feature depictions of animals and their tracks, making for a unique way to photograph the wildlife of Namibia. 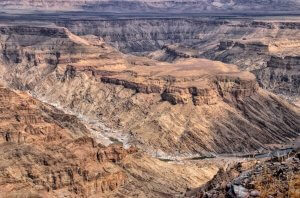 Located in the far south of Namibia, Fish River Canyon is a bit out of the way but well worth a visit, not just for serious photographers but for anyone looking for a bit of perspective (literally, you’ll feel quite small in comparison to this geological behemoth).

Seriously, this canyon is a phenomenon to behold — it’s the largest canyon in all of Africa, measuring 160 km long, as deep as 550 meters, and in some places as wide as 27 meters. That makes it the fifth largest canyon on the entire planet!

Be sure to pack your zoom lens…it’s a long way to the bottom.

Travel south along Namibia’s Atlantic coastline until you reach the port town of Lüderitz, then head 10 kilometers inland and you’ll come upon a bit of a peculiar place in Namibia, the ghost town of Kolmanskop.

The town was originally founded by a traveler who got lost in a sand storm and decided to settle here. In the early part of the 20th century, German rail workers found diamonds in the area, resulting in extensive mining for the better part of fifty years.

By the late 1950s, a steady decline in the diamond supply had led to complete abandonment. Since then, the desert had made this place its own, resulting in well-preserved Edwardian homes and buildings that are half-filled with sand.

This memorable setting that has been featured in a number of films and television shows. If professional cinematographers think of this as a playground, maybe that’s a hint you should plan a visit!

Explore the Regions of Namibia

These are just some of the best places to photograph in Namibia, but there are many more places to visit when you travel here.

Our tented safari tours visit all of these places and more. We help adventurers explore every nook and cranny of Namibia, searching for the black rhino of Damaraland, meeting Ovahimba herdsmen in the Namibian bush, and more. Our mobile safaris travel everywhere from the lush Otavi Mountain Region to the scenic waterfalls of Epupa and Ongongo.

And that’s just the tip of the iceberg. From the Spitzkoppe granite peaks to the capital of Windhoek, Namibia, there’s so much more to explore.