22 September is World Rhino Day. I could write a piece, reflecting statistics and facts, but those you can find on many websites dedicated to protecting the species. Instead, I decided to write from what I observed and what I experienced during our three year stay in the Kruger Park. I find people are bombarded with facts, but hardly ever understand the implication of those facts.

In 2013 we moved to the iconic Kruger Park in South Africa. Rhino poaching hadn’t “taken off” in Namibia yet – at least not on the scale it had in South Africa. Before then, the only exposure to rhino poaching I had was through media reports, seeing photographs of massacred rhino and reading “The Last Rhinos” by Lawrence Anthony and Graham Spence, first published by Sidgwick and Jackson in 2012.

The book starts off with Lawrence Anthony and his rangers finding a butchered female rhino. One of the rangers remarked that there is “too much blood. (…) They took the horns while she was still alive.” (Anthony & Spence, The Last Rhino, page 3). I could imagine the terrible pain this animal had gone through before she finally succumbed to her wounds. As the chapter continues, it becomes clear that one of the field rangers employed to protect the rhinos had been turned by a poaching syndicate. This of course is much more common than I first thought.

Imagine being a ranger and not knowing if you can really trust the team you work with on the ground, who you go into combat situations with and who should have your back. Scary. But such is life and one regularly reads of members of APU teams, and even regional rangers being arrested by their own field rangers for their involvement in rhino poaching.

In Kruger we were based on the border with Mozambique. It was a mere 5 km from our home to the border and incursions were frequent, especially during full moon. Within the first month of our arrival one of the trackers employed at the lodge was out in the bush, tracking an animal, when he was held up by the anti-poaching unit of the KNP. He was alone, walking with a panga (machete), as one does when out in the wild, and as such immediately suspicious to the APU. Fortunately, he remained calm and threw his panga into the bush to show that he was no threat to anyone. 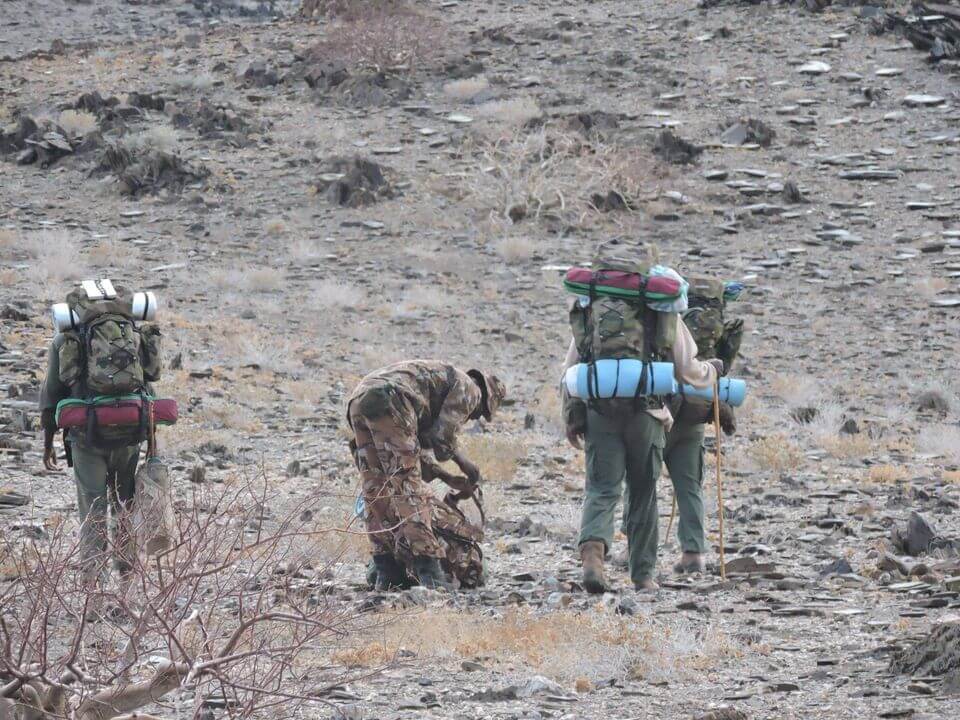 “Just another day in the office for rhino trackers.” Photo by: Save the Rhino Trust Namibia

These rhino poaching syndicates infiltrate the communities, who live on the border of Mozambique and South Africa, but also communities living on the outskirts of national parks in South Africa and Namibia. They recruit their poachers from these poor communities and pay them a very small percentage of what the horn will sell for in Asia. Mozambique, being a country fresh out of civil war, has very limited controls in place. It lends itself to getting the rhino horn out of the country – via ship or aircraft – without any hassle. Hence sending those people into the Kruger to poach makes logistical sense for the syndicates. One US Fish and Wildlife official, who visited the area at the time, referred to these incursions to poach wildlife as an “act of terrorism”.

That first Christmas the invasions increased dramatically. A remark made by one of the section rangers to my husband has stuck with me since: “I did not study nature conservation to become a soldier and fight a war.” However, that is exactly what happened. During that December, poachers sent in school going teenagers to search for rhinos. Imagine the emotional turmoil you face when your job is to protect wildlife and the perpetrator you face is as old as your own teenager, loafing at home in front of the television. To track down criminals is a tough task – especially if that is not what you thought your job would be. When those criminals turn out to be between 14 and 18 years of age, it must take huge determination and commitment to continue with your job as a ranger.

One morning we received a phone call from staff advising that they will be late for their shifts as the road had been closed off. The rangers were in pursuit of poachers and a gun battle had ensued. When you listen in on these battles over the radio, you realise how much these rangers put in to keep “their” animals safe. “Please tell Skukuza to have the coroner on site when we arrive…” was just one of the instructions that sends shivers down your spine and you breathe a sigh of relief when it isn’t a member of the APU who succumbed during the battle.

You never saw and still don’t see a ranger out and about without a rifle, without his or her anti-poaching dog – usually a Belgian Milionis, trained to track and attack (believe me, you cannot come close to those dogs or anything they are trained to protect). The dogs are trained to jump from helicopters, they are trained to walk for many hours and only obey orders from their handlers.

These rangers – and no, it’s not World Ranger Day, but I do think they deserve a special thanks from everyone in tourism – have little babies and toddlers at home. Yet they head out into what can only be described as a war zone every single day, not knowing if they will survive and come back to their families that evening. When you then hear politicians deny the gravity of the situation on the ground, it makes blood boil. I wanted to shout at said politician and ask if he thinks that rangers WANT to be out in the dark of the night patrolling, rather than staying home and spending time with their wives and children.

It has been widely reported that rhino are poached for their horn for traditional medicinal purposes for countries in the east, including Vietnam, China, Myanmar, Indonesia, Thailand, South Korea, Taiwan and Malaysia. This has changed. It has now become a status symbol for the more affluent class to have a rhino horn in their house or to gift a prospective father-in-law with a rhino horn.

While statistics indicate a decrease in rhino poaching in the KNP over the last few years, it remains to be seen whether this is due to law enforcement cracking down on poachers or due to the fact that less rhinos are alive now than 7 years ago, and so they are more difficult to track and slaughter.