Confession of an African prey 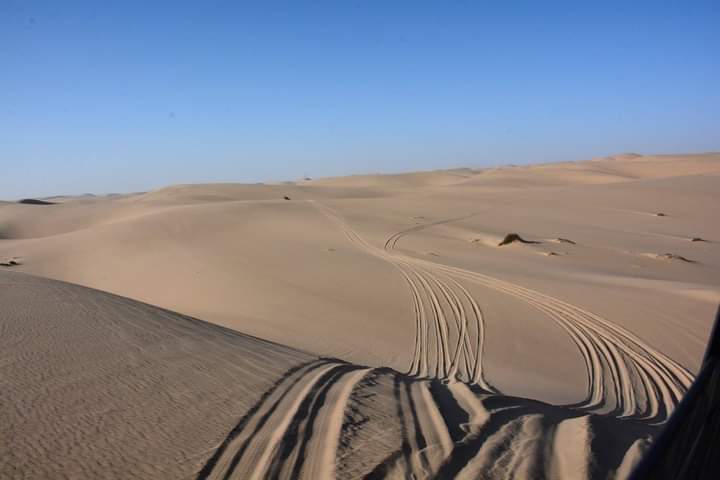 Africa, a name that evokes for most people a world populated by animals of all kinds and where the green savannas, the smiles of the people and an unreal and sticky heat are the masters.

Not for me. When I close my eyes and think of Africa, a mysterious world materializes made of ancestral traditions, adventurous settlers, virtually impossible contrasts and the millennial desert with its stairway dunes until the sky.

It is the place of my soul, where I used to take refuge when on the fourth floor of my concrete tree up in the foggy and polluted boreal hemisphere, I was staring at the traffic below and the frenzy of the Western world. Suddenly this world that I had sewn into myself became an urgency. I knew that sooner or later I would have to leave and leave everything behind to finally float free in the universe that has always populated my dreams. 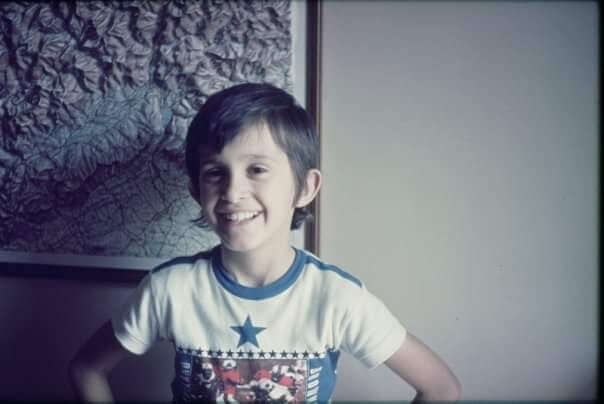 A young Alberto in his home town.

I can’t really explain how all this happened. The definitive call came at the dawn of the new millennium. I decided to embark on a solo trip to Namibia that I had been able to admire in the photo albums I purchased in a dusty book shop and which only increased my yearning for this continent. The desert in particular and the sand-shrouded ruins had unleashed a kind of Stendhal syndrome in me that I had to appease.

My arrival in the country confirmed only one thing. I had to stay. I could no longer allow myself that the dream was shattered in the reality of a return to a world that I felt more and more distant every day. 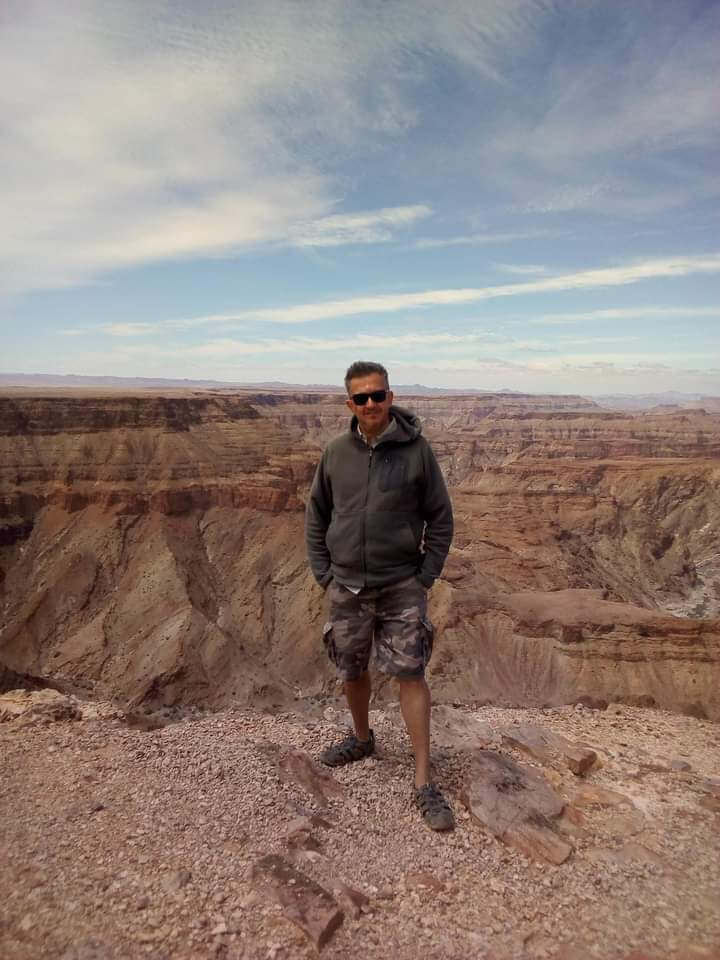 Alberto at the Fish River Canyon.

Africa is a very sweet fever that with the passage of time enters your bones, gently in the ganglia and DNA.

It turns everything upside down, feelings, memories, pains, emotions and everything contributes to irreparably transform you into something different licking your wounds.

It soothes the Western “mal de vivre” with the purity of an infinite horizon, with the apricot color of the dunes, with the majesty of the waves of the Atlantic Ocean where past, present and future all mix.

Here I was finally able, free, to confront myself, to reassure myself and to accept myself for what I am, in my simplicity.

Africa takes you, shapes you and restores you to life as you have never been.

It is a return to the origins perpetrated without you noticing it where you find the innocence in front of a bushman who shows you the lost road and you think that these things have always been there, hidden, by an unstoppable rush to the future that not always shows you the reality of things

Here I fervently embarked on a career that I had dreamed of since childhood. Being a Tour Guide, career that I still pursue with joy and enthusiasm at Namibia Tracks and Trails.

Africa enters you and won’t let you go.

But if I had to choose a destination that more than others bewitched me and indissolubly linked me to this extreme land, my gaze necessarily turns to the South, the great and remote South made of granite croppies and poignant desolation. The breathless sight from the top of the Fish River Canyon, the second in the world for extension, should be experienced by anyone who desires to get lost in his stunning depth.

I first visited the Lüderitz and surrounding area during my solo trip. 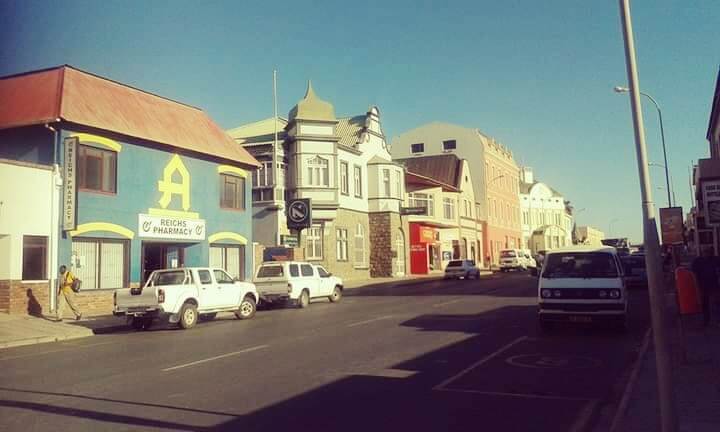 Stun, annihilation, loss of every known point of reference.

How is it possible that in the heart of Africa a part of Ancient Europe has remained intact that still exudes sea travel, hopes, salt and rust? And I always ask to myself how the people can live far from everything and surrounded by the Nothing. The first pulse of life for the town it is at about 120 km.

With my soul now changed forever, in the ghost town of Kolmanskop situated at 10km from Lüderitz I wandered among the houses wrapped in sand that here is the trait d’ union of the coast, always ruffled and ready to swallow anyone who does not respect or fear it, the legendary and merciless Skeleton Coast. 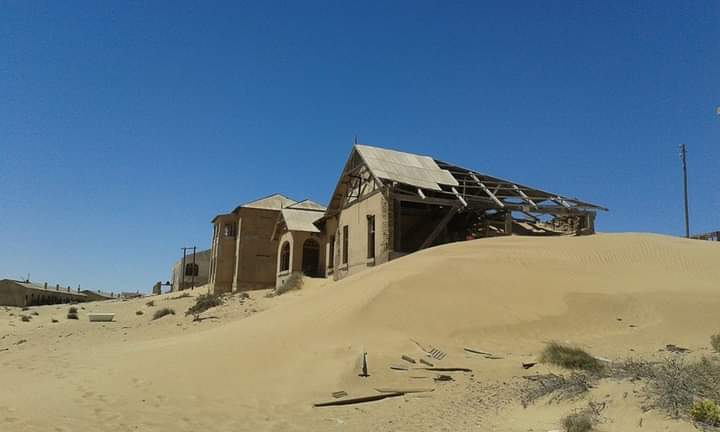 And it is here that, lost in a vortex that cancels the present and slams it between the walls of these houses that are no longer such, I understood that we cannot stop. We must always and in any case go to the bottom of ourselves to understand what could have produced one of the most bizarre human situations ever.

People who left everything to start from scratch in this arid corner of the world slapped by the wind which, completely intoxicated by the diamond fever that infected so many people at the beginning of the last century.

It is absolutely impossible to remain neutral to the Art Nouveau buildings of the port town of Lüderitz, to the black rocks on which the houses of the small population who live off the sea and salt cling. 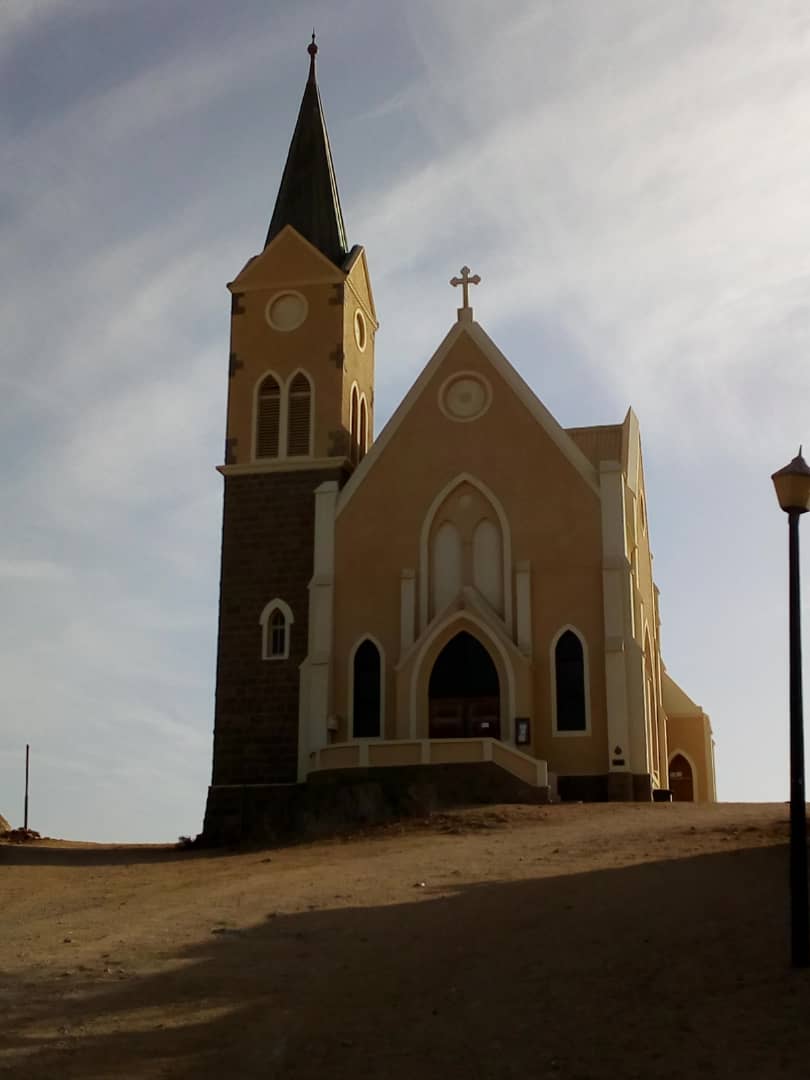 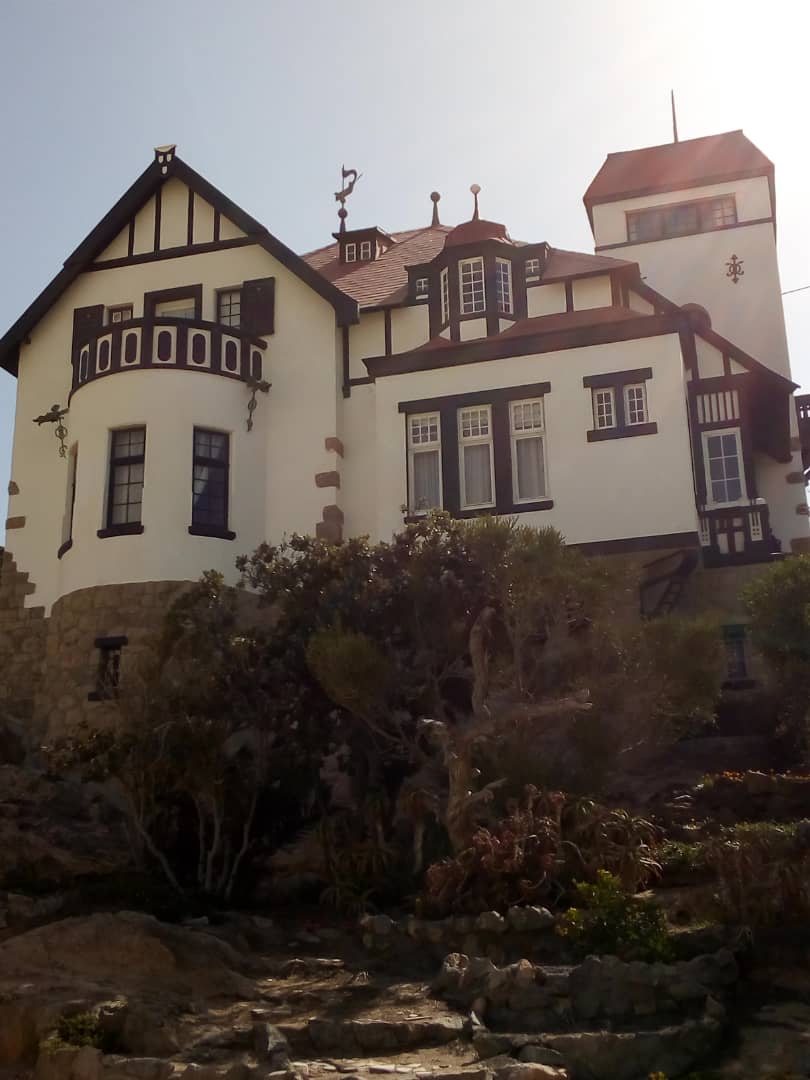 Nor can we forget the past of Shark Island at the outskirts of this picturesque town which, with its tip breaking into the ocean, is like a wound in the country’s bewildered colonial history.

We cannot fail to notice the smell of fish everywhere, of the rust that is gradually dissolving these pointed roofs, detached from any context that includes Africa, but which in the end have meaning here. Poetry in the opponent I would say.

Anyone who decides to turn their gaze towards infinity from the windy Diaz Point will not be able to escape the imaginary sight of those Portuguese sailing ships that sailed the seas centuries ago and that first landed in this natural port abandoning it almost immediately without having first erected a cross of stone in honor of Him who made them land safely.

It just took a Bremen tobacco trader, Adolf Lüderitz to start the German colonial period by bringing life where it seemed impossible. The tenacity of the settlers and the economic possibilities derived from the diamond rush epopee without which Lüderitzbucht, once known as Angra Pequena, would not have risen to the honors of history have guaranteed the nearby Kolmanskop industrialization and technology, a rare commodity elsewhere.

But the glorious epic of Kolmanskop was short-lived after other areas richer in diamonds were found, gradually delivering it to an unforgiving sand that threw it into eternity, preserving it to this day. 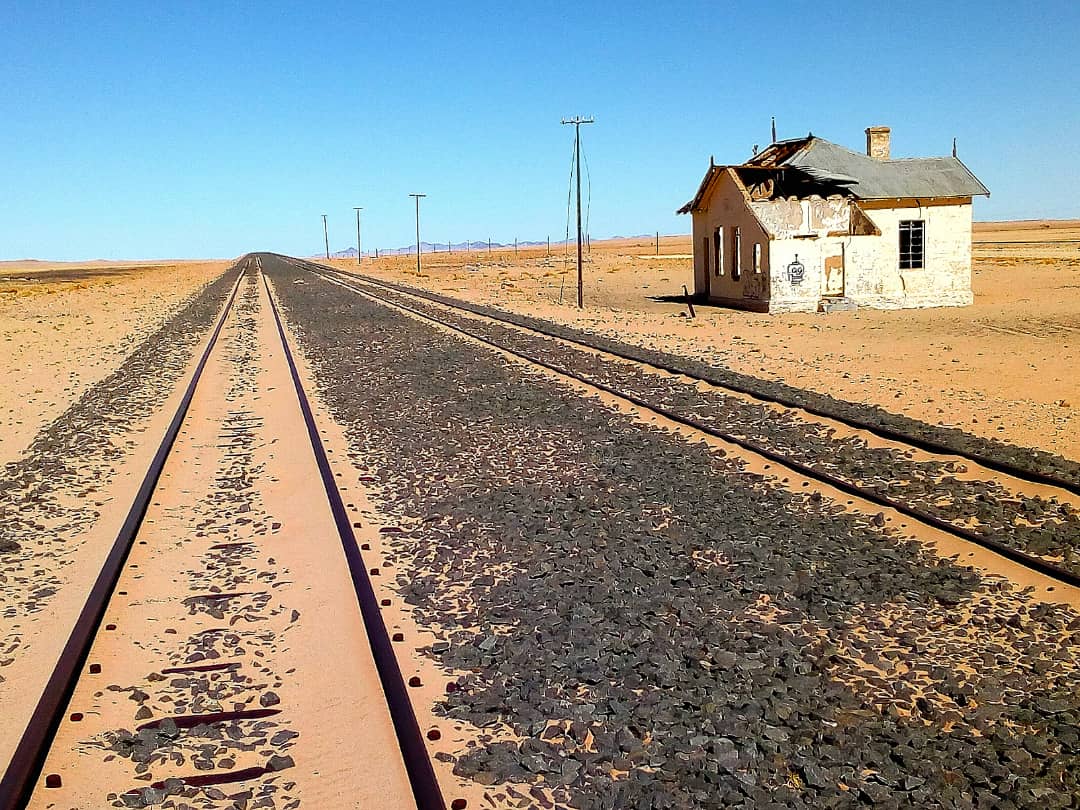 A state of complete desolation.

The fairytale and at the same time feared Sperrgebiet, an area still under the protection of De Beers, is the anthological summa of industrial archeology in a period where the ground was literally covered with diamonds. For a daily visit you need a special permit and a specialized Tour Guide. Near the eerie ghost town of Pomona skeletons of factories scarred by the wind and houses that still seem to host its eternal tenants all this captures me, confuses me, inebriates me, opens up the view to travel backwards, between smoky lands and between consistent silences and sunsets that mark just another day in these motionless sites.

Just before driving back site someone cannot leave out the rock formation of the Bogenfels, the arch cliff that like a towering cathedral lost in the shaggy waves of the Atlantic Ocean is there to remind us the nature can be the most exquisite carver. 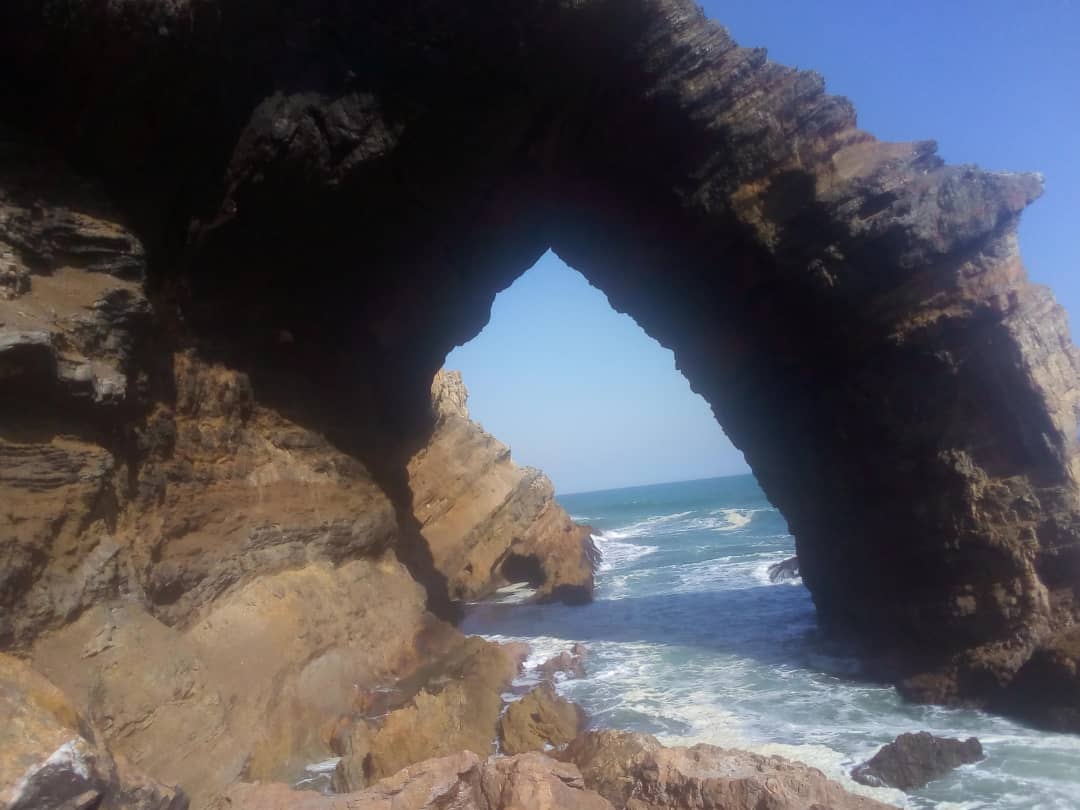 The Bogenfels Arch south of Lüderitz.

Namibia and the South is definitely a destination anyone should visit as a special treat.