During this guided mobile camping safari and lodge tour you will experience the north-eastern side of Namibia. Lush green bushes and flowing rivers give you a very different and unique insight into a world that is so different to the rest of the dry scenery of the country.

Depart from Windhoek via Okahandja, Otjiwarongo and Otavi to Grootfontein.

Visit the largest meteorite in the southern hemisphere nearby Grootfontein before proceeding to Roy’s Camp just north of Grootfontein.

Settle down on one of the idyllic campsites and enjoy the sight of free roaming antelopes quenching their thirst at the nearby waterhole.

The largest known meteorite ever to hit the planet is thought to have done so approximately 80,000 years ago, when it landed in a remote part of Namibia. It was only unearthed many centuries later in 1920, when a farmer tilling his fields stumbled upon it. It was excavated but not transported, due to its stupendous weight of approximately 60 tons, and today can still be viewed at the original site of its discovery. Thought to be between 200 and 400 million years old, it is the biggest organic chunk of iron known to man, but also contains traces of substances which do not occur naturally on earth. It measures roughly three metres by three metres, with an average thickness of approximately one metre.

Overnight camping at Roys Restcamp (or similar) (on Full Board basis)

After breakfast, travel into an easterly direction into the heart of the Bushmanland, Tsumkwe.

Late pm game drive into the surrounding area in search of the many game species of this park inclusive of predators and large herds of elephant. Excellent birding around the various water holes can be experienced.

Overnight camping at the Sikeretti Campsite (on Full Board basis)

Camp will be erected at the Khaudum Campsite, which is idyllically situated on a huge sand dune overlooking the Khaudum River valley. Good opportunity to encounter predators on the late pm game drive on the flood plains of the Khaudum River.

Overnight camping at the Khaudum Campsite (on Full Board basis)

Early morning departure leaving the park in a northerly direction for the Popa Falls area at Bagani.

Following a very sandy and difficult path, the journey continues through dense forest areas with a visit at one of the traditional Kavango communal villages en route.

Arrival at Ndhovu Lodge or similar for lunch.

Overnight camping in the Okavango River surrounds (on Full Board basis)

Optimal opportunity for excellent birding inclusive of a series of raptors can be done on the flood plains and banks of the Okavango River.

Return to camp late afternoon in time to enjoy a relaxing sundowner drink on the viewing deck of the lodge.

Bid farewell to the Kavango region with a transfer drive into the Bwabwata National Park bordering the Kwando River.

This game rich region can easily be compared to a Botswana experience with exceptional good opportunity to encounter elephant, hippo, buffalo, giraffe, roan and sable antelopes, all other plains and water game and exceptional good birding.

Camp for the next three days will be erected at the Nambwa campsite (or similar) on the banks of the Kwando river in the Susuwe area.

AM and PM game drives into the surrounding area as well as the Mudumo National Park will offer unique game viewing opportunities and experiences.

Overnight camping at Nambwa Campsite (or similar) (on Full Board basis)

Enjoy game drives with your guide in the tour vehicle today.

Enjoy game drives with your guide in the tour vehicle today.

The return journey back into civilization takes us into the Kavango region, past neatly constructed communal villages to the town of Rundu.

After a short visit to the Craft Market in Rundu, head back into central Namibia past the towns of Tsumeb and Otavi into the Waterberg Plateau National Park.

The rest of the afternoon at own leisure, relaxing at the pool or enjoy a short hike to experience the unique fauna and flora of this part of Namibia.

Optional early morning game viewing drive onto the massive plateau before heading back to the capital of Windhoek via the craft market of Okahandja. 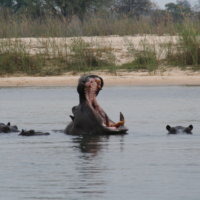 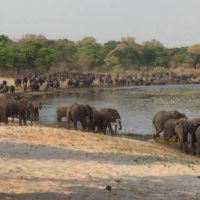 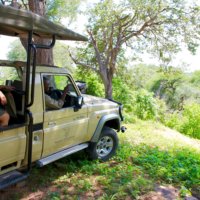 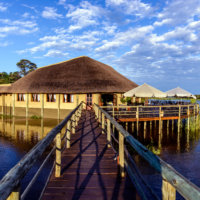